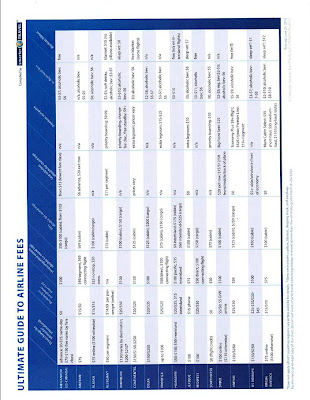 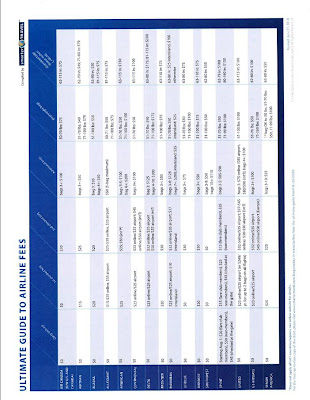 Before the
Subcommittee on Aviation
Committee on Transportation and Infrastructure
U.S. House of Representatives
Washington, D.C.

FlyersRights.org, representing the interests of some 29,000+ airline passenger activists, wishes to have its views on airline fees considered by the members of the Subcommittee when its public hearing on this highly important subject is held. Frustration and anger on this issue is very high according to the phone calls made to the FlyersRights Hotline (1-877-FLYER56).

There are two reasons for this high level of passenger frustration:

1. Extra fees make calculating the true cost of flying very difficult.
Our members believe that the complexity of the “optional and ancillary fees” now being imposed by most of the major U.S. domestic airlines makes it very difficult for airline passengers to calculate the true cost of a proposed flight. This degrades the passenger’s ability to compare the total costs of flying on competing airlines. Passengers’ having accurate and easily comparable information about flight costs on competing airlines has been one of the major benefits that modern – internet – technology has made possible. This advantage is being lost by the proliferation of these new and changing airline fees that are added to the listed airfare before purchase or are paid later at the airport of departure.

2. Congress should enact legislation this year to control airline fees.

The U.S. Department of Transportation has indicated in a pending rulemaking that it would be satisfied if passengers were just given accurate information about these “optional and ancillary fees.” A Senate amendment to the FAA Reauthorization Bill now being negotiated with House aviation leaders would be similarly limited.

FlyersRights.org members strongly disagree with this “information only” approach and believe that this Congress must act promptly to set statutory limits on what kinds of fees and charges can be imposed by airlines and under what conditions.

1. Prohibit Airlines from Charging Any Fee for Carry-on Bags That Comply with Airline’s Size, Weight, etc., Limitations and, Prospectively, for Use of Restrooms on Aircraft.

Congress should legislate that a passenger’s right to carry on-board a properly-sized bag for storage in the overhead rack and for access to the aircraft’s restrooms are basic elements of air travel that should be included in the passenger’s base airfare for air transportation.

As you’ve heard, starting on August 1, Spirit Airlines is planning to impose a fee of up to $45 for each carry-on bag. Ryanair, a European carrier, has been threatening for more than a year to impose a 1 £ or 1 euro charge for use of its on-board lavatories. Congress should act soon to convince these and other airlines not to implement such planned fees. This would simultaneously convince the U.S. flying public that its Federal Government will protect passengers from other unreasonable forms of airline fees and charges.

2. “Even the Playing Field” by Imposing a Federal Aviation User Tax on Airline Fees for Checked Bags and Other Items That Previously Had Been Included in the Published Airfare.

Until they started to “unbundle” their costs, the domestic airlines had imbedded their costs for carrying checked bags within the base airfare on which a 7.5% Federal air transportation tax had been collected. These proceeds were deposited into the Airport and Airway Trust Fund for use for airport and airway system improvements. According to recent DOT Bureau of Transportation Statistics (BTS) data, the airlines this year will generate about $3 billion in checked bag revenue, completely free of Federal aviation taxation unless Congress acts.

This solution would also “even the playing field” among competing carriers. Southwest Airlines and Jet Blue don’t impose checked bag fees; thus they (or their passengers) are paying a 7.5% tax on that portion of their base airfare that reflects the costs for carrying checked baggage. Their competitors are currently paying no Federal aviation tax on their checked bag fee revenues and this doesn’t seem fair.

3. Require Airlines to Refund Passengers Their Checked Bag Fees Whenever Those Bags Don’t Arrive on the Same Flight as Passengers.

FlyersRights.org believes that basic “fairness” requires that carriers promptly refund any checked bag fees collected if those bags are misplaced, misdirected or otherwise don’t arrive at the destination airport when the passengers do. Some of the revenue from checked bag fees should be used to provide a higher quality/more timely service for joining passengers to their checked baggage without delay.

4. Require Airlines to Honor Reservations Without Penalty or Higher Fare for 24 Hours So Passengers Can Compare Total Costs of Flying on Other Airlines or From Other Sources.

Calculating the total costs of flying when different airlines charge (or don’t charge) different amounts for various “optional and ancillary fees” is very complicated and takes time. Passengers should by statute be granted a grace period of 24 hours after making a plane reservation to compare the total costs available for the same trip from other airlines or through designated agents of the airlines (Orbitz, Travelocity, etc.). To require a passenger to pay a higher fare during that interim period or to suffer a financial penalty for cancelling a just-made reservation would exert pressure resulting too often in making a hurried, financially disadvantageous decision.

5. Authorize the Secretary of Transportation to Review the Reasonableness of Airline Fees Imposed for Changing or Cancelling a Confirmed Reservation, and Requiring Better Advance Notice of Such Fees.

Many passengers complain that they must suffer an up-to-$250 charge to change or cancel their confirmed reservations. These airline fees generate some $2 billion in added revenue annually. FlyersRights.org believes that DOT should be statutorily authorized to review the reasonableness of such charges, comparing the costs to the airlines for implementing such changes agains
t the need for a reasonable disincentive factor so passengers won’t be continually changing their flight plans.

6. Prohibit Airlines From Imposing “Surcharges” if the Extra Costs to be Recovered Aren’t Documented or if They Are Only Imposed in Selected Markets.

A “surcharge” connotes to the average passenger an extra fee that is imposed to cover identified higher costs, to be collected only during the period when those extra costs are being incurred, and that is imposed on all those who benefit from those higher costs being expended to provide a valuable service. Not so in U.S. civil aviation. Airlines impose fuel or other “surcharges” when they want to and can, with no required correlation to time or cost, and they impose them selectively and not across the board in all markets. FlyersRights.org believes that the Secretary of Transportation should be authorized to prohibit any airline “surcharges” that don’t correlate to costs incurred and to markets/passengers charged.

In sum, FlyersRights.org urges the House Committee on Transportation and Infrastructure promptly to draft and pass implementing legislation this summer to carry out our above recommendations. I would be pleased to respond to any questions from members of the Subcommittee on Aviation or their staffs to that end.

Thank you for considering these views.

A BILL
To prohibit air carriers from charging fees for carry-on baggage, or for use by passengers of restrooms on aircraft, to require disclosure of passenger fees, to treat air carrier fees on checked baggage as taxable transportation, and for other purposes.

Be it enacted by the Senate and House of Representatives of the United States of America in Congress assembled,
SECTION 1. PROHIBITION ON FEES FOR CARRY-ON BAGGAGE OR FOR USE OF RESTROOMS ON AIRCRAFT; DISCLOSURE OF PASSENGER FEES.
(a) IN GENERAL.-Not later than 180 days after the date of the enactment of this Act, the Secretary of Transportation shall complete a rulemaking that-
(1) prohibits each air carrier operating in the United States under part 121 of title 49, Code of Federal Regulations, from charging any fees for carry-on baggage that falls within the restrictions imposed by the air carrier with respect to the weight, size, or number of bags and from charging any fee for use by passengers of restrooms on aircraft.
(2) requires each such air carrier to make detailed information about restrictions with respect to the weight, size and number of carry-on baggage available to passengers before they arrive at the airport for a scheduled departure on the air carrier; and
(3) requires each such air carrier to make available to the public and to the Secretary a list of all passenger fees and charges (other than airfare) that may be imposed by the air carrier, including fees for-
(A) checked baggage or oversized or heavy baggage, including specialty items such as bicycles, skis, and firearms;
(B) meals, beverages, or other refreshments;
(C) seats in exit rows, seats with additional space, or other preferred seats in any given class of travel;
(D) purchasing tickets from an airline ticket agent or travel agency; or
(E) any other good, service, or amenity provided by the air carrier, as required by the Secretary
(b) PUBLICATION; UPDATES.-In order to ensure that the fee information required by subsection (a)(3) is both current and widely available to the traveling public, the Secretary-
(1) may require an air carrier to make such information available to travel agencies, and to notify passengers of the availability of such information when advertising airfares; and
(2) shall require air carriers to update the information as necessary, but no less frequently than every 90 days unless there has been no increase in the amount or type of fees shown in the most recent publication.
SECTION 2. FEES FOR CHECKED BAGGAGE TREATED AS PAID FOR TAXABLE TRANSPORTATION.
(a) IN GENERAL.-Section 4261(e) of the Internal Revenue Code of 1986 is amended by adding at the end the following-
“(5) AMOUNTS PAID FOR CHECKED BAGGAGE.-Any amount paid by an airline passenger to check baggage for transit on the aircraft carrying such passenger shall be treated for purposes of subsection (a) as an amount paid for taxable transportation.”.
(b) EFFECTIVE DATE.-The amendment may by this section shall apply to transportation beginning on or after the date of the enactment of this Act.