Money Makes The World Go ‘Round

Every blue moon we ask for your financial help in keeping us afloat. 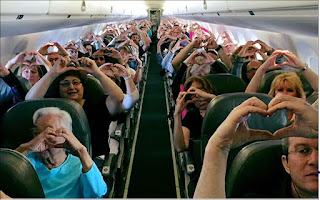 The fact is, that time is now!

Help us keep the lights on. We need your donations for office expenses – the Hotline, bookkeeping, resources needed to cover the news and legislative efforts.

Now lets take a stroll down memory lane, to pre-FlyersRights days gone by, when bad weather frequently caused passengers to be stranded on hundreds of planes that had pulled away from the gate but sat idle on tarmacs, in a purgatory of neither taking off nor returning to the terminal, for three, five, even 12 hours and more.

From these atrocities, FlyersRights was born. Despite a hard-fought battle with the airline industry, we achieved a federal rule setting fines of up to $27,000 per passenger for airlines that keep passengers stuck for over three hours on the tarmac.

The impact of the rule change has been dramatic, with the number of flights suffering tarmac waits of more than three hours falling 97% (1,299 to 44) from 2008 through last year!

Still, it’s a very important time for FlyersRights. The civil liberties of airline passengers have seen a steady and relentless erosion since the events of 9/11.

Last August, FlyersRights filed a petition with the Transportation Department (DOT) to have the Federal Aviation Administration set minimum seat and passenger space standards. Airlines are fighting aggressively against us and want no restrictions on reducing seat size and legroom, leading to increased health and safety risks.

Last February, we petitioned the DOT to cap charges for changing flights to $100.

We also filed legal papers that got DOT to correct its misinformation in its Fly Rights publication saying there was no delay compensation – when, in fact, the Montreal Convention and EU provide for up to $2,600 for flight delays on international trips.

Currently, we are about to file a rulemaking petition with DOT to require airlines to advise consumers of these rights rather than hiding them, or simply lying to passengers -saying they have no delay compensation rights.

You need FlyersRights because the airlines and members of Congress are battling passenger protections – and individuals have no negotiating power. You accept the airlines’ rules or don’t fly.

Over the years we’ve achieved many goals:

24 Hour Hold – If you need to change or cancel a ticket within 24 hours of buying it, you can do so without penalty (assuming you’re booking at least 1 week before departure). You can also hold a reservation for 24 hours before paying for it.

Route Changes – DOT now requires airlines to give you prompt notification of delays, cancellations and route changes. And if you don’t agree, you get a full refund of the fare (without any penalties, even for a nonrefundable fare) so you can rebook (at your own expense) a more suitable flight.

Bumping – If an airline bumps you and rebooks you on a flight that arrives at your destination within two hours (or between one and four hours for international destinations) of your originally scheduled arrival, then you are entitled to 200% of the one-way fare you paid to get to your final destination, up to $650.

If your delay is more than two hours or if the airline doesn’t make alternate travel arrangements for you, your compensation doubles to 400% of your one-way fare, up to $1,300.

Refreshments, Communication and Accommodation -The airline is required to provide to delayed passengers, free of charge:
•Meals and refreshments in proportion to waiting time
•Two phone calls or emails
•Hotel accommodation and transport between the airport and hotel, if a stay of one or more nights becomes necessary

Lost Luggage – If the airline loses your checked bags, and it was domestic travel, the airline is required to reimburse you for up to $3,300.

Still, much more needs to be done for the rights of passengers who are being squeezed physically and financially as never before. Last September, FlyersRights has petitioned the federal government to create a regulation mandating minimum seat width and seat pitch for commercial airlines.

We publish weekly newsletters.
There’s no charge to receive any of them: