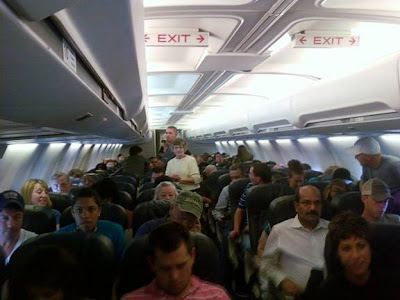 Passengers aboard US Airways Flight #1576 received hotel, taxi and food vouchers thanks to passengers David Anderson and Peter Pimino, who had the presence of mind to use cell phones to call FlyersRights.org at 1-877-FLYERS-6 (1-877- 359-3776).

While passengers became increasingly restless (some screamed at the crew and actually threatened to open the emergency exits), Anderson and Pimino had the presence of mind to call FlyersRights.org. By now, it was 6:00 PM.

We advised them that, in the event of a mechanical delay, they were entitled to be re-booked immediately to an alternate flight or, in the event no flights are available, to hotel, taxi and food vouchers. We also asked them to use their cell phones to photograph the event; their photo appears above. Thanks to their quick thinking, the flight was immediately taken back to the gate, passengers were allowed re-booking (without a fee), and those who had to stay overnight were given cab fare, a meal and hotel accommodations.

Incidentally, this is one more reason why you should always carry a cell phone aboard an aircraft. You may need to make a vital call, a video or take photos to document your horror story.