So, take out the O2 source, but put the mask back, shut the access door, and walk away, quietly. They say, in effect, “Not to worry, the odds are low.” The odds of requiring oxygen on an airliner are low, unless the situation actually arises. Then, the odds of needing oxygen are exactly the same at every point inside the aircraft. That’s because the time of useful consciousness—the time during which you can still help yourself—drops drastically as altitude rises. Here’s the data on that: 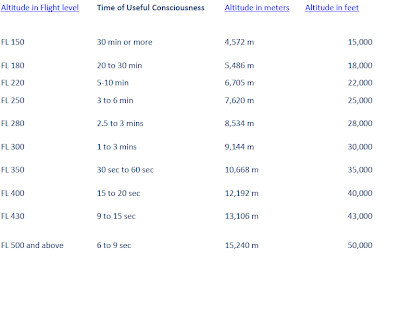 OK, so droning IAD to SFO at 35,000 ft (flight level 350), your TUC is 30 to 60 seconds. In that time, you must find a source of O2, or you will pass out. Period, non-negotiable. In the time approaching the limit, “useful” becomes a less and less relevant term. That is, you may be theoreticially capable of strapping on a mask 30 seconds into the event at FL350, but your mileage may vary with age and physical condition.

So, the FAA is calculating, in fact, that there WILL NOT BE A DECOMPRESSION. If that’s so, then heck, let’s take all the O2 systems out of aircraft. Think of the weight and fuel savings!! Neat!