Now, the FAA report on Boeing that described everything as great with the certification process, should be reviewed and taken apart by the NTSB.
The NTSB report said that even now, a year after the Dreamliners returned to the air following two battery-overheating incidents, the standard for lithium ion battery design and safety “does not address all of the unique aspects of a battery’s installation on an aircraft.” Boeing and other airplane manufacturers “need to evaluate whether additional requirements and testing are necessary to ensure aircraft-level safety.”
It is now time for the Boeing report that was produced by the FAA to be thoroughly dissected and analyzed by the NTSB.  It is clear that, contrary to the findings of that report, things are NOT great with the certification process, as they asserted.
“Cozy Self Regulation”
The NTSB acknowledged that the Boeing and FAA insularity distorted perspective and hindered safety.
The FAA and Boeing conducted an examination of their own actions in the design, building and certification of the Dreamliner. The committee was composed of thirteen: six from the FAA and seven from Boeing who, together and not surprisingly, found ‘no flaws in the verification of the airplane’.
The NTSB blamed the FAA for not reaching out to independent experts years ago to get another view of the lithium ion batteries on a commercial aircraft. In short, the FAA let itself be used by Boeing to accept a superficial job.  In what other businesses has “self regulation” resulted in better safety or quality of product for the customer?
In an op-ed by former NTSB chairman, James Hall, he says the aircraft makers persuade the FAA to let them certify their own aircraft so they could save money.
“Problems with the plane’s lithium-ion batteries emerged about 14 months after the 787 entered commercial service in November 2011, underscoring the folly of this policy. The agency let Boeing help write the safety standards, develop the testing protocol and then perform those tests. In 2008, a year after standards for the battery system were approved with special conditions on the containment and venting of the batteries, stricter industry guidelines for these batteries were released. But the FAA did not require the 787 to meet those new guidelines.”
Hall adds, “Even Boeing’s chief engineer on the 787, Mike Sinnett, acknowledged to the NTSB that one of the battery tests had been inadequate and was not “conservative enough.”
“The F.A.A.’s recent decision to approve Boeing’s plans to fix the lithium-ion battery seems shortsighted and represents a complete failure of government oversight”, he concludes.
The 787 is the first commercial jet to rely on rechargeable lithium ion batteries to power key systems. The batteries are lighter, letting airlines save fuel. However, a January 2013 fire occurred aboard a 787 parked at the Boston airport when one battery cell had an uncontrollable increase in temperature and pressure, known as a thermal runaway. 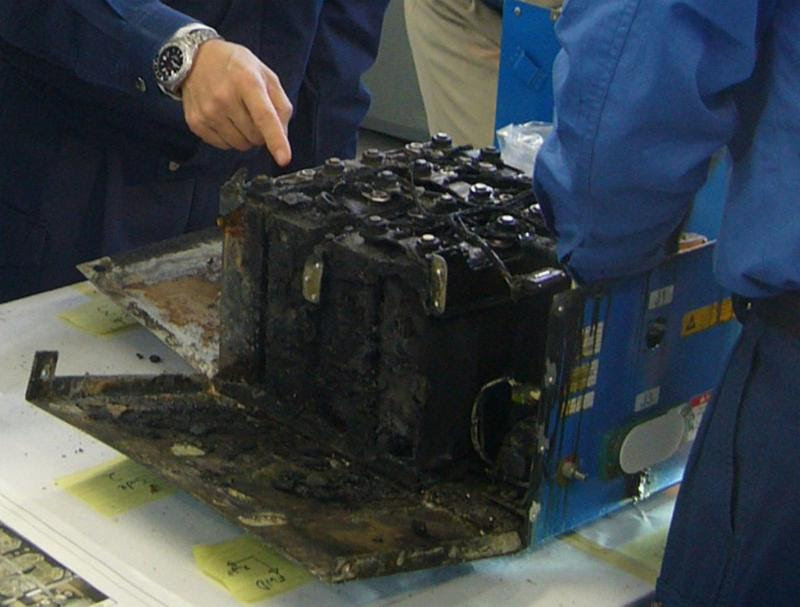 Nobody was injured, but that fire, and a subsequent smoke incident on a separate 787 nine days later, led to a worldwide grounding of the Dreamliner fleet.
The NTSB report concludes that, in devising a process to assess the safety of the battery design, “FAA certification staff members relied primarily on Boeing’s expertise and knowledge to define the necessary tests and analyses.”
The FAA has a reputation of being in bed with the airlines and Boeing is known for firing engineers who speak out about the 787 Dreamliner.
There are now 140 Dreamliners operating around the world. An additional 891 have been ordered by airlines.
No Short-Circuit Testing
In January 2007, the FAA approved a testing plan proposed by Boeing that did not include testing for short circuits.
To avoid such oversights again, the NTSB suggests the FAA look outside the aviation industry for expertise when approving a new technology.
For instance, the Department of Energy has extensively tested lithium-ion batteries. If the FAA had reached out to that department or other experts, the report says, the FAA could have recognized its tests “were insufficient to appropriately evaluate the risks” of a battery short circuit.
The safety board recommends the FAA review its lithium ion battery testin
g process. Also, any certification of new technology should involve “independent and neutral experts outside of the FAA and an aircraft manufacturer.”
Given the fact that Boeing never came up with the root cause of the battery problem and instead simply built a box to contain the fires, tells us the company was looking for the cheapest possible solution.
Issues Go Back To 2004
The safety board says the problems that caused the initial battery incidents go back to September 2004, when Boeing first told aviation regulators of its plans to use lithium ion batteries on the 787.
What is not said is that a huge number of other very significant issues concerning the 787 were handled the same way. Issues of crashworthiness, flammability, lightning strikes and durability of the composite structure were all managed the same.
“When Boeing and the FAA worked together to set up certification tests in March 2006, they considered the smoke a battery fire might cause but, according to the safety board’s report, “Boeing underestimated the more serious effects of an internal short circuit.” In January 2007, the FAA approved the testing plan proposed by Boeing. It did not include testing for such short circuits.”
Let’s make one thing clear: the cause of the battery failure is not understood. So unless the cause is understood, a battery failure is possible again, even likely.
What we see with the FAA certification process is the same kind of streamlining that collapsed the financial markets. The 787 is a keyhole view for the public to see into this process. The Dreamliner has a longstanding tradition of sweeping problems under the rug, giving creative explanations, and fixing only the problems that forcefully creep out again.
This NTSB report confirms our fears about aviation. What about tomorrow? This question is more important than ever.
The FAA has 90 days to respond.
(Sources for article:)

FlyersRights’ Statement
The FAA and DOT should limit the 787 to -at most- flying within two hours of the nearest airport, pending comprehensive testing of its proposed battery fix and a period of at least 24 months of trouble free operations.
This position is supported by substantial independent expert opinion, prior experience with the lithium ion batteries and prior certification decisions and precedents by US and other regulatory authorities.
See:
<br
/>
The FAA cleared the Dreamliner for takeoff without completing its own top-to-bottom review of the aircraft’s design, and even before the National Transportation Safety Board was able to find out what caused the battery fires in the first place.
Meanwhile, an FAA blue-ribbon panel of industry experts has issued new safety standards for lithium ion batteries in commercial aircraft, but they won’t be applied to the Dreamliner.  The government’s aviation safety chief, Peggy Gilligan, explained to the House Transportation subcommittee that “it’s very difficult to go back and cause an existing product to be retested in accordance with some new standard.”
Boeing’s persistent problems with its lithium ion batteries have caused its European competitor, Airbus, to announce that it will reject their use altogether for its new counterpart, the A350.
Paul Hudson, president of FlyersRights said, “The FAA has ignored the 2013 FlyersRights petition and has doubled down on wholesale delegation of its safety regulatory authority to Boeing on the 787 Dreamliner.  Now it must be seen if the FAA also ignores the NTSB’s recommendations and its own prior safety criteria for lithium ion batteries on airliners.” 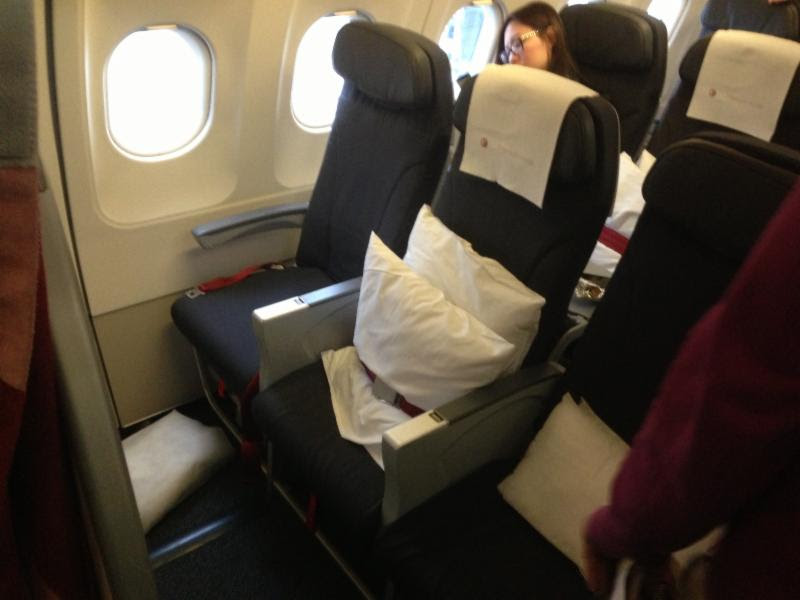 Dear DS,
Rouge seems to be designed as a cheaper airline.
http://www.aircanada.com/en/about/media/rouge/index.html.  They do not have a First or Business Class, they call it Rouge Plus, (4rows).
http://www.aircanada.com/en/about/media/rouge/documents/ac_rouge_onboard.pdf
(Bottom of page 1).  Apparently some other planes have other configurations, but this looks like the last one in the PDF.
http://en.wikipedia.org/wiki/Air_Canada_Rouge under Fleet, note on 319 “Middle seats blocked in first three rows”.  Not too terrible for a 1,194 miles flight.
-FlyersRights
(Thanks to Dan Prall)
(Followup by DS)
This is on Air Canada Rouge. They’re, according to Wikipedia , serving “…leisure destin
ations”. This seat cost 3500$ USD round trip Calgary to Los Angeles.
Air Canada proper no longer serves this route. Pretty sure Westjet forced this play since they are a popular one-class airline.
Dear FlyersRights:
Private pilots say border agents go too far. Read more here:http://www.mcclatchydc.com/2014/05/19/227840/private-pilots-say-border-agents.html#storylink=cpyThe young pilot from Miami was trying to impress a woman with a lunch trip to Key West.This is very interesting to me as my private pilot son-in-law took our daughter for a romantic flight to a small airport at the ocean (Washington State Coast) 22 years ago to have dinner and to propose marriage.  Had this interception and interrogation happened to them at that time, I also wonder if she would have said “yes.”